WANG introduced the first programmable desktop calculator in 1966, called the 300 series. Later extension came in 1968 and special machines where made for special tasks. So, for a construction engineer a 360 would be the best choice, for other purposes there was the 370 or 380.

If you would like to know more about the 300 series, please visit the oldcalculatormuseum
There is no 300 calculator in the museum, but I do have the manuals. 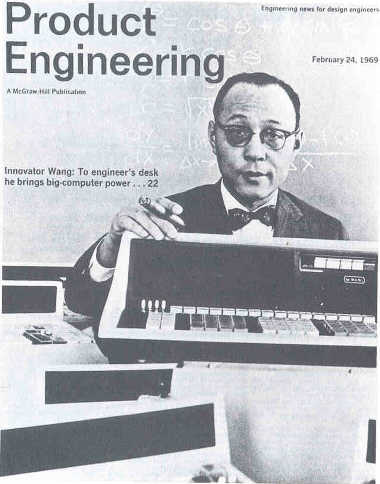 In December, 1968, WANG Labs announced the new 700-series calculator to compete directly with HP’s 9100 calculators. As many people who know high-tech industry understand, the announcement of a product doesn’t necessarily mean it exists. Even back in late 1968, the notion of “vaporware” existed, and WANG’s introduction of the 700-series was just that. Even though the product had been announced, shipments weren’t promised to begin until mid-1969, which, as it turned out, was a milestone that WANG missed by a few months. In February of 1969, McGraw-Hill Publishing’s Product Engineering magazine published a cover-story on the new (and not yet available) WANG 700, featuring a proud, cigar-toting Dr. Wang surrounded by a number of 300-series keyboard/display units and his new baby, a prototype WANG 700.

Cooling was a problem, but soon a fan was introduced that solved the problem. In 1972 the Institute I worked for, had a need for more calculation power so they could perform more complex analyses without using time-sharing. They bought a WANG 720C in  1972, together with a program to do Multiple Regression Analyses.
This picture, taken on the 21st of April 1973 and shows the 720, together with the dual cassette drive and the IBM-selectric printer. What can not be seen, but is there is a 708 extended memory. This black-box contained another 4K of core-memory. Added to the 2K of the 720, there was 6K all together. In a 720, you can store 256 numbers and no program, or 2048 program steps and no data and anything in between. Care had to be taken to avoid a collision of data and program. The extra memory was used for data-storage, as a Multiple Regression Analyses needs a big matrix of numbers. The program was made by WANG Belgium in Ottergem, and later modified by me. That was the moment I got a conflict between data and program !

Is soon learned to program the 720 and still today almost 50 years later, I know almost all the codes by head. A program would look like this: (it stores the value of zero in the first 100 data registers)

A 720 has a X and Y register so you can step through the program and see the program resolved right in front of you.

If you would like to have a look into the manual that came with the 700, please click on this link
(Courtesy Mr. Bittrick) 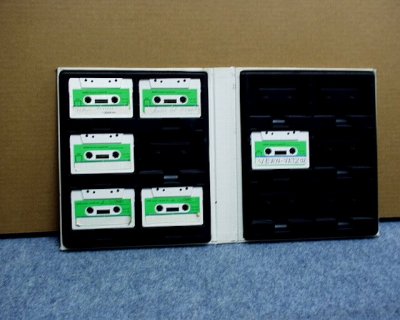 The machine that gave the most trouble was the dual cassette drive. The tapes were not formatted and you could store blocks of 1 byte up to 256 bytes in sequential order. In practice you would always use 256 byte blocks, but still there where too many problems.
The tapes where stored in albums, 12 data-tapes in an album. I still have several of these albums.

For those of you who want to know more of the technical details of the 720, please visit the site of Rick Bensene and have a look at his wonderful page about the 720 This is the same 720C, still running perfectly, with the Memorex dual floppy drive (740-2) and the 709 tape drive.
You can clearly see the X and Y register with the nixie-tubes. The floppy drive was a wonderful extension. It was fast and reliable and gave us the possibility to do much more with the 720. Soon we had a herd-management program running for our breeding sows, hens, dairy cattle and so on. Certainly the management program for the sows must have been one of the first in the world. I later on developed a commercial sow-management  program for the 2200 that was  widely used by thousand of farmers in the Netherlands. But, the basic idea was born on this 720 !.
In my opinion the 720C was more a desk-top computer then just a calculator. 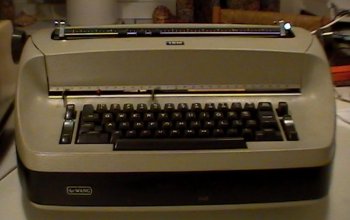 The 720 series needed an output device. The IBM selectric was converted to work with the 720. Amazingly there is no on/off button, it can only be switched on by sending an special code from the 720 !. It is a wonderful piece of engineering with an incredible speed and print quality. The ball shaped typing head spins around like mad.

There is this amazing story that IBM had left out a spring to guide the ribbon in the Selectrics they supplied to WANG. It took a long time before WANG discovered the problem !. The 720 came in 3 models, A, B and C. This was the normal policy of WANG, a simple machine and also more sophisticated models.
These were expensive machines and it took not long before new, cheaper models were introduced.
If I am correct the next model was the 600, later followed by the 500 and even the 400 series.

The model on the image is a 500 with a printer on top. It has only one row of nixie tubes. The 500 is not in the museum, but I do have a number of spare boards for these machines. 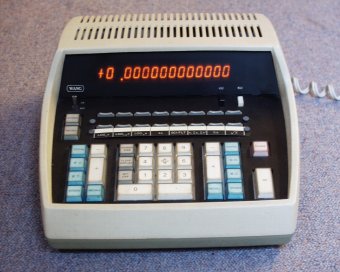 This is a recently acquired C50 scientific calculator.

It has a so-called left and right calculator that do work independently.
As they share a common memory, complex calculations can be carried out without to much trouble. Of course, this machine also has special function keys that can perform pre-programmed tasks like calculating standard deviation etc.

It was even possible to link an IBM punch card reader to make small programs.

The C serie came in different configurations with or without the possibility to make small programs. 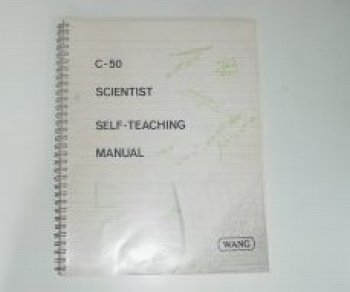 The manual is very well made. It is simple and clear and within 20 minutes you know how to work on the C50.

Back to the main menu