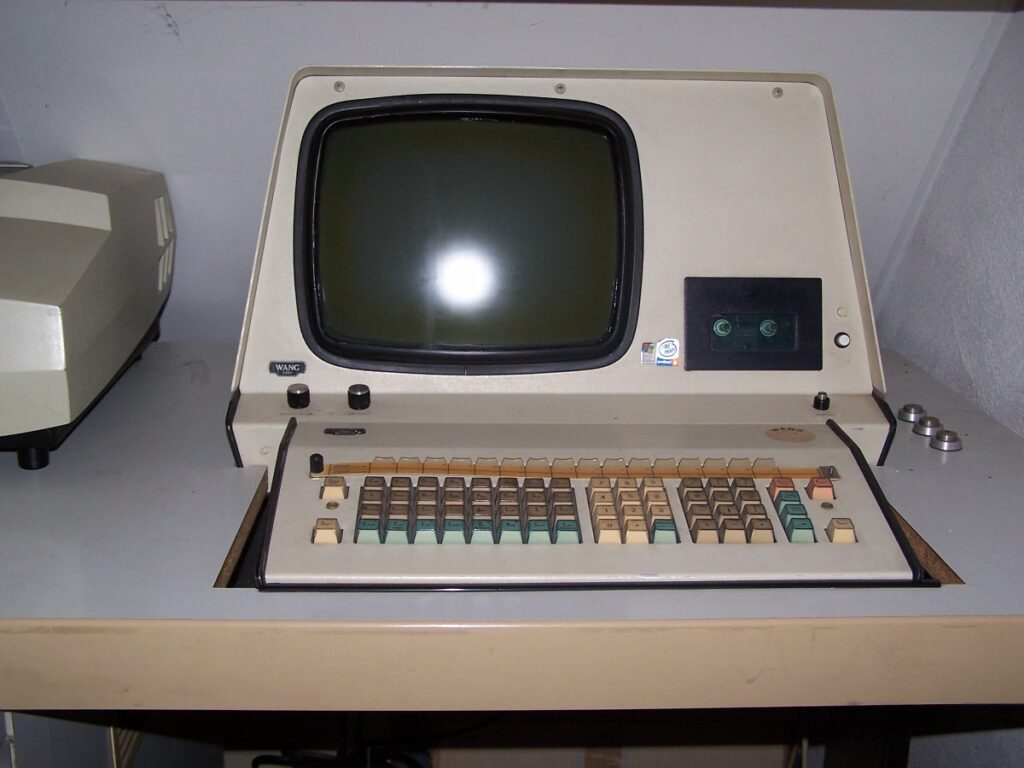 The WANG 2200 appeared in May 1973 and was the first WANG minicomputer that could perform data processing in a common computer language. The models came as 2200-A,-B and -C. The A model being the simple machine, while model’s  B and C had more capabilities in arithmetic. The next model was introduced as the 2200-T with even more power. But, these where slow machines, working with cassette’s for storage of programs and data. As an option you could buy a purposely made desk to hold the CRT, a printer and the CPU with separate power supply.
CPU and power supply where hidden in a drawer, but still rather well accessible. This is the keyboard from the 2200-C model in the museum. (courtesy Hannover Architectural High School)
The program language used was BASIC and in order to speed up programming, many statements where on the keys.
With the key in the left corner you could switch between the normal characters and the statement function.
In the statement mode, the full text of the statement like RESTORE, READ, PRINT, SIN(  etc. would appear on the screen with a single keystroke. Only with the introduction of new terminals at around 1980, using serial communication instead of coax, this function was abandoned. 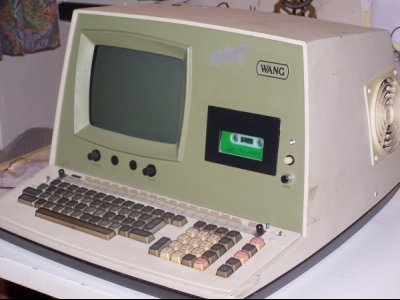 This is also one of the very first models form the 2200 line of products
It is a model 2200 E2
Built around 1976. It may look like a terminal, but it is a full scale computer. All the logic boards are inside. Just plug it into the mains and it will show READY BASIC:
The CRT is 16 x 64. The cassette drive on the right could store programs and data.
As the cassette drive was operating, the screen would immediately loose its stability and start to shake each time a block of 256 bytes was read from the tape.
It even holds a D25 socket so you could attach a modem or perform serial communications. There is a Centronics parallel interface as well for connecting a printer. Many thanks go to Georg Schaefer from Germany who did an excellent job in repairing the CPU board, so the 2200 is in working order again. (April 2005)
Courtesy Mr Ed Schijf (2005) Much like the 2200 E2 model showed above, but with a wonderful extension of two 5.25 floppy drives mounted on top of the case.
Again, all the logic is inside, making it quite heavy indeed.
PCS stood for Personal Computer System, and indeed, with this machine on your desk you could perform almost any task, not being dependent of anyone else
To see more about the PCS II click here I had seen the 2200 A en T models of 1974 at the WANG office at Utrecht. The CRT was a great advantage, but I did not like the tape, nor the screen (16 x 64) and these were slow computers. But….. than in 1976 I was allowed to do a little work on the 2200 VP. This was different !
There was a Diablo 10Mb hard disk attached and this machine went like a rocket. It could perform matrix operations, even calculating an inverse matrix, by just a single statement. A 20 x 20 matrix was inverted in just a few seconds. So, at the 20th of April 1977 our 2200VP arrived at the Institute. Dr Wang was a true engineer and that was shown in the program language that came with the 2200.
Basic already had a bad name, certainly at the Universities as DEC had a very poor Basic, but this was different. The 2200 works as an interpreter, solving and executing each program line at the time. You can run single lines, what makes debugging easy, provided that you understand what you are doing. On this picture you can also see the Memorex dual floppy that was connected together with the 10Mb Diablo hard disk.(not in the museum) A 2221W impact printer completed the configuration. We worked very successfully with the VP and at one time had two systems multiplexed. Unlike the older models it loaded the BASIC interpreter and the operating system from a floppy or the Diablo drive. This enabled WANG to extend and improve the operating system and the BASIC language in a much easier way, just by issuing a new release.
It must have been one of the first computers that booted ! The speed was incredible and only  the Intel 386 chip eventually beat this machine in speed. Keep in mind that was almost 10 years after the introduction of the 2200 VP.
Eventually we needed more terminals and that made the 2200MVP the obvious choice. A MVP is a VP, but with the memory divided into partitions. Each user was assigned to a particular partition. The processor would work in a round robin fashion, giving each partition a time slice of  a few  milliseconds. At first 8 terminals could be connected, later on expanded to 16. The Diablo soon was too small and a Phoenix drive was connected with 80Mb. (4 fixed spindles and one removable). A wonderful machine that hardly ever gave a problem.
WANG had a very good team of field engineers that would do everything for the customer. Sales representatives where a different kind. I never had high thoughts about these people. It was a miracle as you had the same salesman for more than half a year, so they had no understanding what we where doing anyway. By 1984 WANG  – Netherlands office had moved to a third location and even that location was soon to small. WANG was doing very well indeed ! But, the first PC’s had entered the market and they would soon bring WANG in great problems. 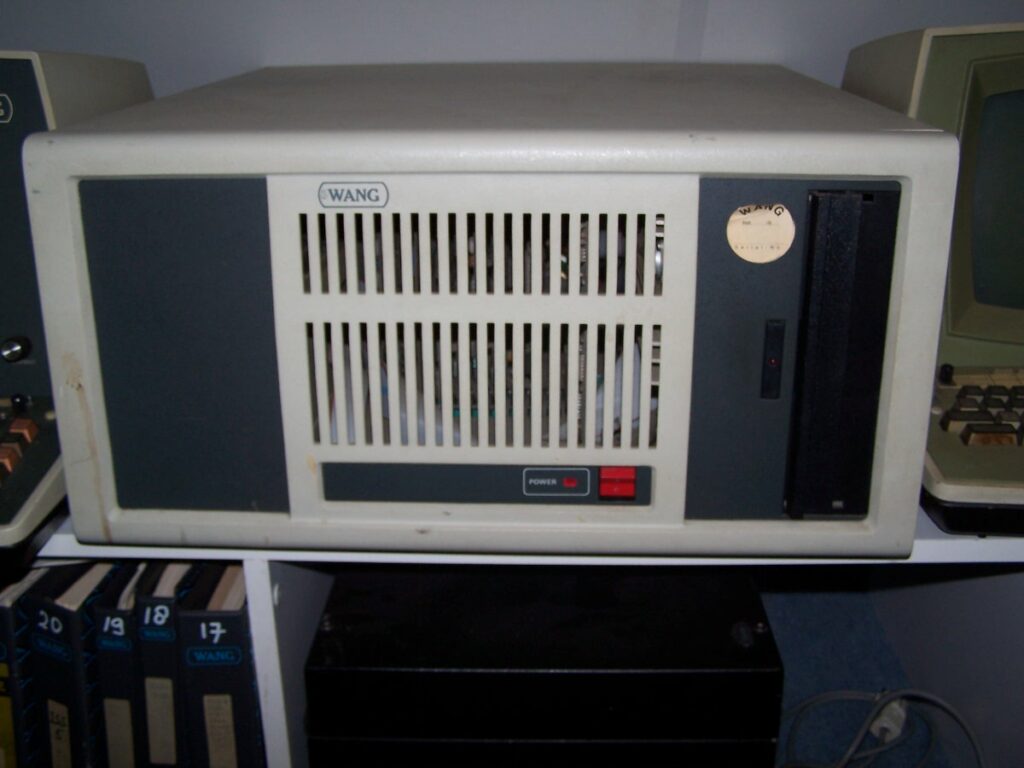 The disk drives from Diablo and Phoenix where in size like washing machines and very expensive.
WANG had to find a way to make the 2200 more accessible for the small enterprises.
By 1980 the first completely concealed hard disks entered the market. They where often referred to as Winchester drives.
The storage capacity would be in the range of 8 Mb.

In May 1980 the SVP was introduced, with a Winschester drive, an 8 inch floppy and a maximum of 2 terminals.
Still not very cheap, but the PC had not entered the market so WANG mainly had to compete with HP machines in about the same price setting. 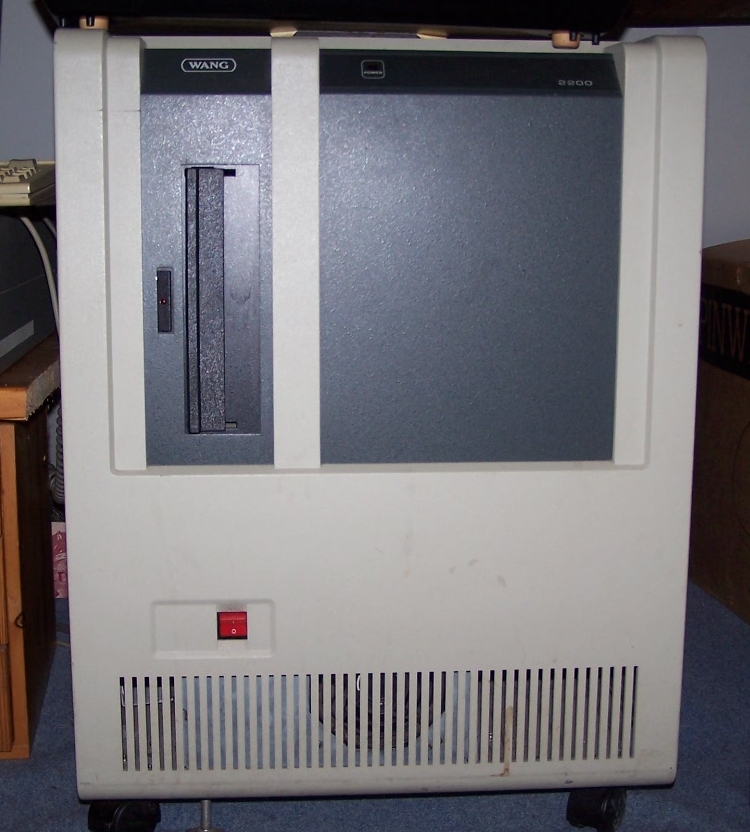 Besides the SVP the LVP was introduced in 1980.
Mainly for the same market of small enterprises.
The LVP could have a maximum of 4 users, that is 4 terminals could be connected using serial communication.
The cabinet is larger and can be moved around easy. Because of the larger cabinet, it could hold 2 Winchester drives giving the user more storage capacity. 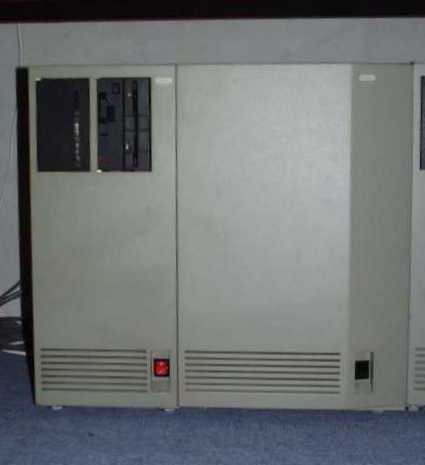 WANG had entered the world of finance and banking in 1978 by introducing the VS computer. From 1982 to 1987, not much attention was given to the 2200 line. Their installed base must have been several 10,000th, all over the world. As no new products for the 2200 came on the market, people where looking for alternatives. Some former WANG employees had made a product called NIAKWA, that would emulate a 2200 on a PC. Much cheaper and faster, but for single user only.  In 1988 WANG must have realized that they where loosing customers and new products where introduced. The 2200 was now called the CS. Soon there came Disk Storage cabinets with large Winchester drives, cheap terminals and printers. We soon had the Phoenix drive replaced by two DS cabinets with tapes as backup medium.
The CS on the image was made in Ecuador. The main advantage was the much lower cost for maintenance. All the older 2200 machines where very expensive in maintenance and the replacement of an older system with a CS could be paid in a few years from the reduction in maintenance costs ! What you see here is a very special machine. In 1990 WANG decided to have the 2200CS running on an Intel 386 chip and named is the CS-Turbo ! The code was developed in India as I believe.  The CPU , not visible on the image, is still a gray, not very good looking box. You see two different terminals, an old and expensive one on the left and a cheap one on the right. The two Disk Storage cabinets are under the table.
This machine still works perfectly, although it has not done any real work since July 1995. We used this CS-Turbo from 1992 to 1995 very successfully 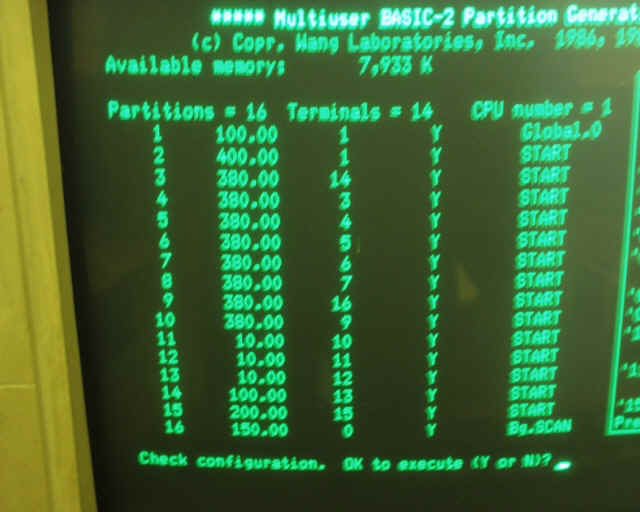 This machine could have partitions much larger than the 56K that was the limit on a MVP. On the screen  you can see that partition 2 has been assigned 400K ! For old 2200 users this must be a miracle.
The so called Global Partition, holding programs that could be accessed by all users could be as large as memory allowed !
It was even possible to create a virtual disk and all data that needed to be accessed fast and often, was loaded into the allocated memory partition during the boot process. Most left is an expensive 2336 DW (1983), in the middle an 2436 DE (1988), much cheaper but still with the same keyboard and in the right an 2536 DW that was made in Taiwan and was the less expansive one. These terminals could work with a MVP, LVP, SVP, CS and CS-Turbo.
If the extension of the model is DE, then the terminal was for data entry mainly, but a DW extension mend that the layout of the keyboard was for Word-processing also.

In England a company by the name of Kerridge had decided to go on with the beautiful and powerful language but not the 2200. They developed an emulator for UNIX, written in the C language and with a lot of C functionality added to it. In 1995 we bought an HP9000 and the Kerridge software, called KCML. On the 15th of July 1995 we switched off the WANG 2200CS for the last time. As we had decided not to use the WANG terminals, but use PC’s as workstations connected to the HP9000, this was really the end of WANG at the Institute. It is amazing that from 1977 up till 2011 we have used more or less the same operating system, be it not on the same platform. But, all our data are still easy accessible and the Institute has had great benefit from this. We can compile data from many experiments in one data-base to do all sorts of complicated analyses, that sometimes make live experiments superfluous.

We must keep in mind that WANG invented Word Processing. Almost all of the machines showed above where also on the market with the W extension. Same machines, but specially adapted for word processing.

By 1995 WANG was in great troubles and had recovered from a Chapter 11 status. This gave them time to restructure the company while keeping creditors at bay. Dr Wang had died some years before and I believe that his vision was badly missed.

Return to the main menu